Known as the oldest shark in the world, the Greenland Shark can live over 500 years. They are found in the North Atlantic Ocean and Artic Ocean. They eat mostly smaller sharks, skates, eels, herring, capelin, Arctic char, cod, rosefish, sculpins, lumpfish, wolffish and flounder. They have also been found to have the remains of polar bears, moose and reindeer in their stomachs. When the sharks are smaller they predominantly eat squid. Because they are slow swimmers, the Greenland Shark hunts these species while they are sleeping. Due to their coloration, they can approach prey undetected. As they get closer, they use their large buccal cavity in order to create a suction that draws in the prey. This is the likely explanation as to why the gut contents discovered in Greenland sharks is often whole prey specimens.

Since the North Atlantic Ocean and Artic Ocean have frigid temperatures – like just above freezing – in addition to it’s low metabolism it is a very slow swimmer. Normal swimming speed for this species is 0.76 mph with the fastest swimming speed recorded at 1.6 mph. In 1957 it was discovered that the Greenland Shark develops it’s pups within their bodies as opposed to laying eggs. This gestation period can be between 8 to 18 years. Each litter produces an average of 10 pups. This species can produce anywhere from 200 to 700 pups in their lifetime due to their long lifespan.

The Tiger Shark got its name from the vertical stripes that run down the sides of their bodies as juveniles. Once the shark matures, these stripes fade. Their skin can be a combination of blue to light green with a white or light yellow coloration on their bellies. A full grown Tiger Shark can weigh 2,000 pounds – which is nearly a metric ton! Their diet consists of fish, invertebrates, sea turtles, some marine mammals, stingrays, sea snakes and dead animals. Some of the less assumed prey are sea birds, metal, plastic, wood, fishing gear, and other trash. Although all of those items are not nutritious options for them – except for maybe the sea birds.

While these sharks have also been known to attack people, scuba diver and shark conservationist Jim Abernathy is famous for befriending a Tiger Shark. So like with any wild animal, if you happen to come across one of these majestic sharks, leave it alone and observe from a safe distance.

On the reproduction front, the Tiger Shark can give live birth to as many as 80 or more pups. The embryos develop in individual eggs until they hatch. Although they are apex predators, they have been known to become prey to Killer Whales since they have developed a very effective hunting strategy for large sharks like the Tiger Shark. In Hawaii, the Tiger Shark is considered to be sacred as some native Hawaiians believe that their eyeballs have special powers of visual perception.

Although this deep water shark is one of largest in the world, it is the third smallest of the filter-feeder family. It was discovered in 1976 and since then less than 100 have been reported or caught by humans. It is a very rare occurrence to come across one. The Megamouth swims with it’s mouth open as it consumes plankton and jellyfish. They have been observed in northern Japan, Hawaii and occasionally off the coast of California.

The Megamouth Shark is a slow swimmer that has a flabby body and a large, wide head. They have an upper lip which has a silvery white color. It was once believed that their lip was embedded by luminous photophores. A study in the 80s suggested that the lip may act as a lure for plankton. Then later in the mid 80s a team examining a second shark proposed that the lower lip might glow with the white band used as a reflector of sorts. However, neither theory has been proven. In 2020 a study of the Megamouth Shark concluded that this species of shark does not produce any light at all. The white band was found to be highly reflective of light and could be either a feeding mechanism or it could possibly be used as a means of identifying other individuals of megamouth sharks. Their mouths can be up to 4 feet 3 inches wide and can have up to 50 rows of teeth in their upper-jaw and up to 75 rows of teeth in their lower-jaw.

Speaking of filter feeder species of sharks, the Basking Shark is the second largest of their kind. This migratory species is found in every ocean on the planet. Sadly, even though they are found pretty much everywhere, this species is Endangered due to it being a commercially important species. Although they are a relatively slow moving species, they have been observed to breach the surface and jump entirely out of the water. Scientists believe that this may be a method of helping the shark to dislodge parasites and commensals. It could also be their intraspecific threat displays of size and strength that other large species like whales and other sharks exhibit.

Their diet consists of zooplankton, very small fish and invertebrates. A 16 foot long Basking Shark has been calculated to filter up to 450 tons of water per hour swimming at an observed speed of 1.9 mph. This species is ovoviviparous which means that they embryos rely on a yolk sack, however they are live birthed once they are fully developed. The gestation period is thought to span anywhere from over a year up to 3 years, although more research on this needs to be done in order to verify. To learn more about how you can help this endangered species, check out SharkTrust.org to learn more.

This slow swimming, absolutely majestic filter-feeding carpet shark is the largest shark in the world! 75% of this species are found in the Indo-Pacific region of the ocean. They have also been observed in the Atlantic Ocean from as far north as Maine and far south as South Africa. Their mouths contain over 300 rows of very small teeth and 20 filter pads. The filter pads are used to help the shark filter feed. Their diet consists of copepods, krill, fish eggs, Christmas Island red crab larvae and small nektonic life such as small squid or fish. They have also been observed feeding on clouds of eggs during mass spawning of fish and corals. Their lifespan is estimated to be 80 to 130 years.

Sadly this species is also endangered due to impacts of fisheries, by catch and boat strikes. Just like us humans have unique fingerprints, Whale Sharks have a unique pattern of spots on their bodies. This allows individual sharks to be identified by each other as well as by researchers. By taking photos and cataloguing them, The World Wildlife Fund has identified 458 different whale sharks in the Philippines. The WWF has also tagged 29 whale sharks in order to help us learn more about them. Even though we have some whale sharks in captivity, we still are missing a lot of information about them that is necessary to better understand them. Since 1998 the WWF has helped with Whale Shark tourism to ensure that the boat operators and participants in Whale Shark swim excursions instill a code of conduct that protects the sharks. You can support the WWF and their efforts to conserve the Whale Shark by adopting one here: Adopt a Whale Shark. 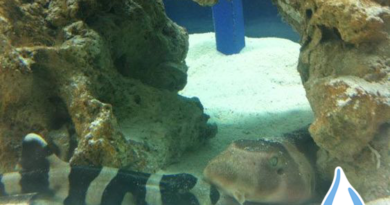 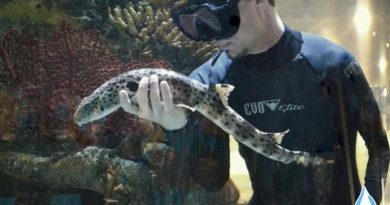 8 Facts About The Epaulette Shark 9 Facts About The Horn Shark